Our next event in
view Event
Skip to content

Known to audiences across the country from her regular appearances on The Dr. Phil Show, as well as national stints on Fox News, CNN, NPR, and Court TV Radio Television, Areva Martin is one of television’s most in-demand legal experts/analysts.

A quotable authority on workplace, disability rights, education, custody and women’s issues, this accomplished and multi-award winning lawyer, syndicated columnist, author and public speaker is also quoted and or featured on the pages of publications ranging from the Los Angeles Daily Journal to Cookie Magazine to Redbook and the LA Times. The founding and managing partner of Martin & Martin, LLP, Areva has built a reputation for ACTION. In addition to positioning her firm as one of the premier African-American female owned firms in LA, Areva has developed a multidisciplinary civil practice, which serves some of the nation’s top corporations, non-profit organizations, governmental entities and high net-worth individuals. She is also President and co-founder of Special Needs Network, Inc. (SNN), a non-profit launched specifically to support families with special needs children.

In addition to being a sought after legal expert, Areva is also an inspiring author. Her second book, The Everyday Advocate, was released by Penguin Books. Her first book, Journey to the Top, is a must-read for female professionals interested in achieving the ultimate career success. Areva Martin is one of the most sought-after autism experts in the nation. When Areva’s son, Marty, was diagnosed with autism at 18 months, her profession became personal. Suddenly, this highly capable and accomplished woman’s most important title was “mom fighting for her child.”

Areva quickly tackled the complex web of diagnoses, misconceptions, and treatments with the same vigor she had marshaled in every one of her cases. She was fortunate. Her education and network enabled her to navigate the medical establishment and find the best treatment and resources for Marty. Areva’s eyes were now wide open and her heart even more so. She realized not all parents and guardians had her advantages and immediately did something about it – founding the Special Needs Network (SNN), a non-profit organization created specifically to help minorities and low-income families advocate for their autistic children. SNN has raised millions of dollars and provided for over 15,000 families in low income communities across California.

Areva has modestly accepted the numerous accolades that followed, lifting them up to shine a light on SNN and the families that struggle every day for their kids. Among other honors, she received Cookie Magazine’s Smart Cookie Award for making the world a better place, Woman of the Year Award from LA County, Neighborhood Hero Award from Bank of America, Professional Excellence Award from the Association of University Women, and most recently, along with Gov. Jerry Brown, the 2011 California Legislative Black Caucus Civil Rights Leadership Award.

With regular appearances on The Dr. Phil Show and The Doctors, as well as stops at The CBS Early Show and Fox News, CNN, Dr Drew and Dr Phil, Areva’s expertise has helped millions of caregivers, guardians, and parents find the strength and the voice to advocate for their children and loved ones.

She is the only African-American woman and attorney on the California Legislative Blue Ribbon Commission on Autism and is the Chair of several organizations.

Click on the BTR player Box below each episode

The Everyday Advocate – Standing Up For Your Autistic Child

The Kelli and Issy Stapleton Tragedy 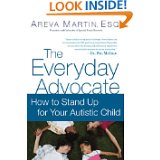 Back to Team
Highslide for Wordpress Plugin